Documentary film making is in the midst of something a renaissance at the moment. Most notably, Laura Ricciardi and Moira Demos’ Making of a Murderer sparked as much of a buzz, and as many water-cooler conversations, blog posts and tweets as any blockbuster has over the last couple of months.

In search of the truth, how much is the viewer being manipulated? Our new columnist, film maker and editor Gabriel Gane, takes a look at the tools the film maker (and Werner Herzog in particular) may use to to caress and coerce us…

Whether you’re an avid film lover, or a passing voyeur of the medium, chances are you’ve been touched and influenced by it at least once. From the writer’s desk to the screen, film draws from a toolbox of tricks and techniques to make you feel a certain way, think a certain way and frequently pay a certain £9.50 at the box office. Whilst it’s mainly fictional creations that gain most of the attention in this area, documentary frequently employs the same toolbox.

Techniques such as cinematography, direction and editing help forge the plot of a documentary, giving it form and making it digestible for an audience. We use the term plot here, not story or narrative. Story and narrative are of course both in play within a documentary, but it is the plot that nine times out of ten you’ll be moved by, perhaps without even realising. All this will come as little surprise; the artist is by their very nature a manipulator and this doesn’t change in film-making. No matter how faithful one tries to be, manipulation is unavoidable in transcribing something, of telling it second hand, after first processing it yourself.

When the Lumière brothers first invented the Cinématographe in 1895 they envisioned it to be little more then a passing fancy, an attraction at a fun fair. This pure essence of cinema, the idea of it being nothing more than exhilarating, remained for many years. It wasn’t until Nanook of the North portrayed an idealised view of Inuit life above the Arctic circle in 1922, that the idea of the documentary fully gained traction.

Even with its first steps documentary making was already in a murky world of manipulation. Director, Robert J. Flaherty had sets built and scenes constructed, even going so far as to stage an early version of the nuclear family, not necessarily common in Inuit culture at the time. Flaherty’s use of these devices – contrived sequences, direction and editing – all set a precedent for the future of the documentary.

Today, with the advent of multi-platform media, documentary filmmakers strive for ‘non-intervention’ as much as possible. That said, there will always be those who stick out. Werner Herzog is constantly searching for what he calls the ‘ecstatic truth’, a deeper kind of truth than the truth of the real: the truth of poetry. This means he’s more than willing to manipulate the framework of his films. It’s well known that Herzog has no qualms as to whether his films can even be categorised as documentary or fiction, to him “It’s all just movies”. With that in mind, lets take a look at his manipulation of documentary in action, particularly his use of cinematography and direction.

Scattered throughout Herzog’s documentaries are monologues, great sprawling lines of dialogue, delivered by the film’s respective subjects. Shot in a seemingly vérité fashion, with natural lighting and a single handheld camera placing the subjects in apparently real world settings, these scenes are the director’s favourite means of communicating important information to the audience. Often bookended with silence, they serve as a foil to his more pensive sequences.

One of the most intriguing uses of this technique appears in Herzog’s Grizzly Man. The film opens with an account of Timothy Treadwell’s death at the paws and claws of the very bears he was trying to protect. Later, further insight is provided through a speech by the coroner, Franc Fallico, in which the poetry (if we can call it that) of Timothy’s death remains true, but the delivery does not.

The scene opens to a curious silence and a portrait of Fallico, standing centre frame, instilling a sense of a court-case confession, a feeling that only intensifies as the camera jumps closer with each cut. Herzog’s camera ends the scene retreating from Fallico, to once again show a wide shot of him.

The combination of extremes of perspective give the scene a hurried secretive feeling. Couple this then with the highly rehearsed quality of Fallico’s lines and gesticulations; pointing to his ear; imitating clawing and, most theatrical of all, turning away from camera seemingly halfway through a sentence, and we’re left with something that could easily be a scene from a fictionalised biopic. These tropes pop up all over the director’s documentaries, sometimes farcical, sometimes harrowing, but always rehearsed and always accompanied by his ‘curious camera’. In The White Diamond Herzog straps Dorrington to a jet engine, recording a monologue about flying and dreaming, leaving him by the end, through virtue of the lingering camera, re-enacting his dreams and pretending to fly off himself.

In Little Dieter Needs To Fly he takes Dieter back to the jungle to act-out his capture and torture at the hands of the Viet Cong years before. In one such scene he shocks us with an anecdote about the dismemberment of a finger, only for the camera to sidestep Dieter and throw its attention on a man silently cooking in private behind.

It’s this curiosity through cinematography that Herzog uses to greatest effect in the hunt for his ecstatic truth. In the silent moments before, after and even during scenes of confiding, he manages to capture something beautiful. Of course he’s in no way limited to this one trick, often completely fabricating scenes in order to better his plot.

In The White Diamond, feeling the film needed it, Herzog staged an argument between himself and Dorrington, re-shooting it five or six times and giving Dorrington a prop to hold in his hand to make him look mildly threatening. At the beginning of Little Dieter Needs To Fly, he has Dieter obsessively open and close doors to his car and his house, stating that “it’s very important, it denotes freedom to open and close a door” – again, something totally staged. Possibly the most farcical of all his deceptions comes in a scene from Bells From The Deep: Faith and Superstition in Russia. The film tells the story of Russians in search of the lost city of Kitezh; the scene in question depicts two men crawling over a frozen lake in prayer and in search of the lost city, peering through the thick ice. In reality the two were local drunks Herzog paid to venture out onto the lake. 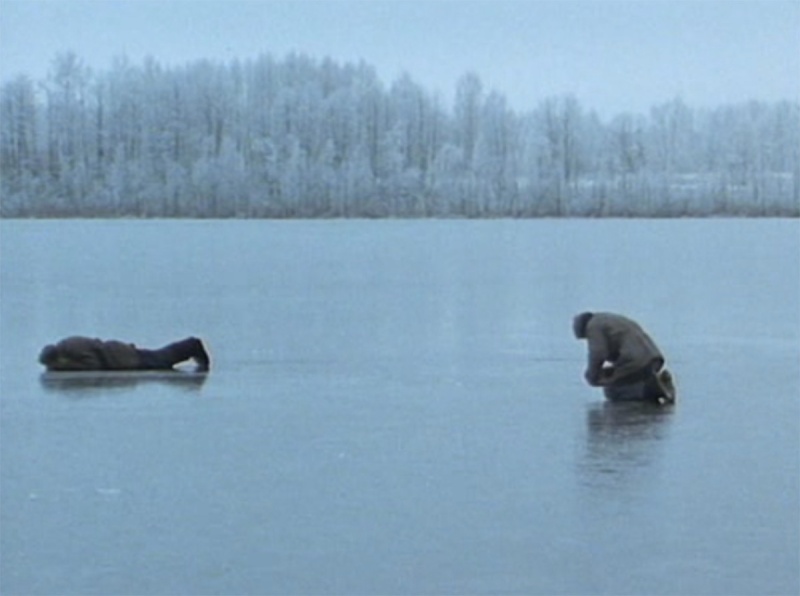 Bells From The Deep – Werner Herzog

Herzog is an auteur with no boundaries; a man who thinks any filmmaker worth their salt should know how to milk a cow and jump start a car; for them and for him the camera doesn’t lie or tell the truth, it’s an artistic endeavour, a balancing act between the two. Whilst Herzog may only be one filmmaker, his outright tampering betrays the tampering of others in the same field and the fact that the field itself was made to be tampered with. Like the best art it holds a mirror not only to the viewer, but also the maker and their manipulations. A cynical person might say manipulation is the key to life; I think it’s the key to story telling.