With the release of High-Rise, Ben Wheatley’s adaptation of JG Ballard’s novel, the manner in which architecture is used as a cinematic device is in the spotlight again.

Through Blade Runner, Rear Window and Inception (spoilers below for all three), via Harry Potter, Star Wars, Alien and The Shining, Miniclick’s resident film writer Gabriel Gane explores some of the most notable occasions in which architecture has played a starring role.

Architecture in Film – A Foundation for Story

In the introduction to Nikolaus Pevsner’s An Outline Of European Architecture he says this; “We can avoid intercourse with what people call the Fine Arts, but we cannot escape buildings and the subtle but penetrating effects of their character, noble or mean, restrained or ostentatious, genuine or meretricious.” Pevsner makes the point that architecture transcends other forms of art through its capacity to enclose and impinge on space, having an emotional as well as aesthetic impact.

Today the pace of life is such that many people frequently fail to stand still and consider their surroundings: architecture it seems has become for most, nothing out of the ordinary precisely because it defines our everyday life. We move among it, inhabit it; it’s our beehive, our bird’s nest and so it becomes largely invisible to many of us. And yet, in the cinematic world the opposite seems true. We marvel, we run, we creep with our heroes and villains, through architectural landscapes.

Think of the wondrous scenes that take place in Hogwarts (Harry Potter 1-8) or the playful ones in the eponymous setting of The Grand Budapest Hotel. Now think of how many times you felt a creeping sense of fear as Danny peddled his trike through the empty corridors of the Overlook Hotel in The Shining, or Captain Dallas squeezing himself along the claustrophobic air ducts of the Nostromo in Alien. Through these few examples it is clear that the surroundings of our characters, as well as their predicaments, help shape our emotional response.

Architecture also drives plot. In Christopher Nolan’s Inception architecture literally and figuratively divides the characters;  the action is split thematically into different maze like structures, or levels, that are built within the plot by an architect: the characters navigate between them, moving forward towards a common goal, some getting lost along the way. This culminates dramatically as Cobb watches helplessly as Mal jumps from a window to her death. It can also unify, for example, a bond of trust is made between Luke and Leia as they swing to safety across a man made chasm in Star Wars – A New Hope. In fact, plot can be driven so much so by architecture that it can serve as a door to entire genres and sub genres: the courtroom drama, the office comedy, the haunted house.

Coming back to Pevsner’s statement on the emotional captivity of buildings, Ridley Scott’s Blade Runner certainly encapsulates this idea. Set in a future LA, where society relates status to architecture, with the God-like powerful dwelling in pyramids (see also Metropolis’s New Tower of Babel), all the way down to the disease and dereliction of the streets below. Resulting in a society built vertically, both metaphorically and literally. The opulence of Tyrell’s pyramid set against the poverty of those the pyramid stands upon mirrors many of the films central themes; religion and man, design verses nature and inequality. Which are in turn personified in the naturally ‘defective’ J.F. Sebastian and the unnaturally faultless Roy Batty. 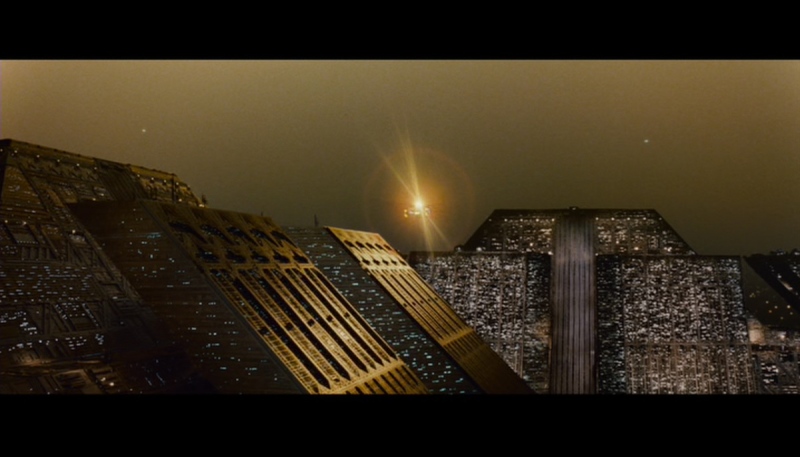 From Deckard’s claustrophobic, cave-like apartment, to Hannibal Chew’s frozen grotto of a laboratory, Scott’s vision of the future does a good job at making us feel trapped, but it’s the street scenes that hold the most subterranean echoes. Drawing heavily from designs by visual futurist Syd Mead and completely masking large sections of Warner Bros’ back-lot, the street sets of Blade Runner’s LA still hold up as one of the best and to many, most accurate depictions of future urban living put to celluloid. Pipework, steam-gushing vents and neon smother everything, watching these scenes one can’t help but think of Bowellism and of Roger’s and Piano’s Pompidou Centre in Paris. Pre-existing architecture is bastardised too; heavy, cartoonish columns mask the clean lines of the Bradbury building. All this accumulates to oppress the characters and ultimately the audience, as if we’re squeezing through the veins of a city that no longer welcomes humans.  The city, however,  still functions with measurable logic. It has infrastructure, in shops, bars, street restaurants, public and private transport, hell it even has parking meters. This is where Blade Runner’s strengths in design stem from, the attention to the real, and the real obstacles thrown in the way of our hero. 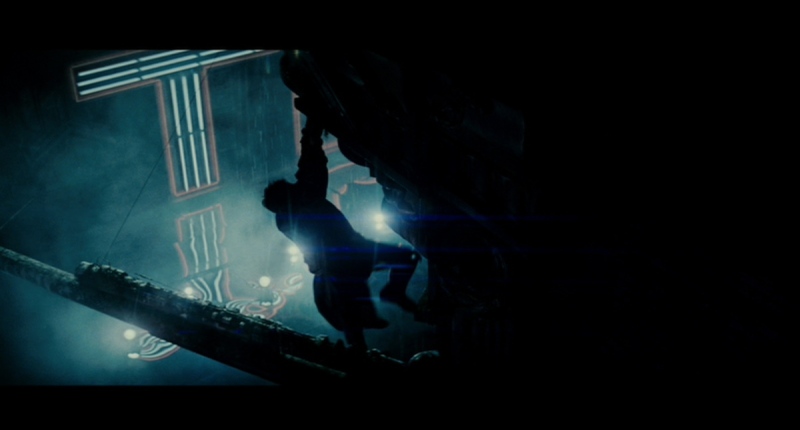 When Deckard finds himself cornered by Roy in J.F.’s flat near the end of the film, Scott presents him with very real physical barriers. In fact, so real are these challenges that most of the tension arises from watching him overcome them, rather then being chased down by the murderous replicant. We watch him push through rotting floors and scale the outside of skyscrapers – scenes that aren’t all that uncommon in the ever popular action franchises. Consider similar sequences in The Fifth Element, in itself not a bad movie, but which holds little tension compared to Blade Runner because the logic of the world created wasn’t built from the ground up, introducing its hostile highs before it’s mundane lows and so to not be truly relatable.

A created cinematic world doesn’t have to be fantastical however; Hitchcock’s Rear Window employs the same tropes to great effect. Where Blade Runner’s success is with relatable public space, Rear Window’s is with private, regarding the relationships between locked rooms and their as equally locked residents. This compartmentalisation of characters and plotlines within separate rooms, either conjoining or across a courtyard builds an innate tension, in turn breeding paranoia and perversion, leading Hitchcock to subvert his own created worlds; building in methods of spying and having characters enter and leave rooms through non-traditional modes. 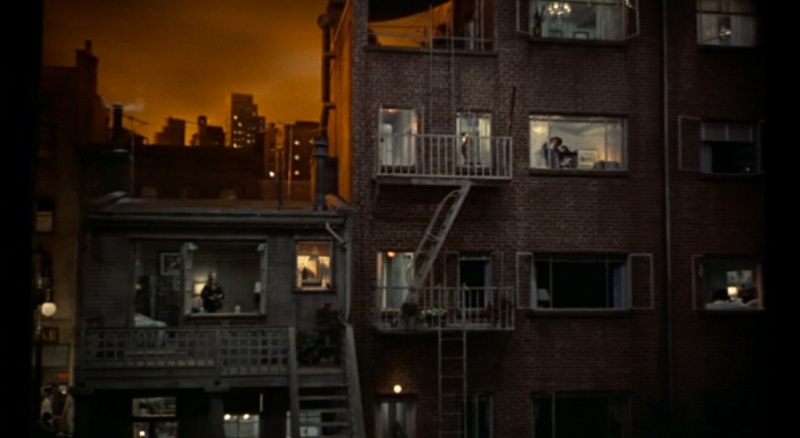 Hitchcock doesn’t limit this to Rear Window, in Psycho, Norman spies on Marion as she undresses via a peephole in his parlour wall, a symptom of the psychosis yet to be revealed. This voyeurism is only heightened in Rear Window, a story centred around the very act of watching, with the windows of Jeff’s neighbours representative of movie screens, each with their own cast of characters and plot. Hitchcock famously had the entire apartment-courtyard set built and his focus on authenticity was such that, unsatisfied with the height of the apartment blocks (the tallest of which stood 40 feet), he had the basement of the sound studio ripped out and the claustrophobic courtyard built down into it. As a result Jeff’s second floor apartment was in reality at ground level. Many of the apartments also benefited from running water and electricity, and could be lived in, if so desired. 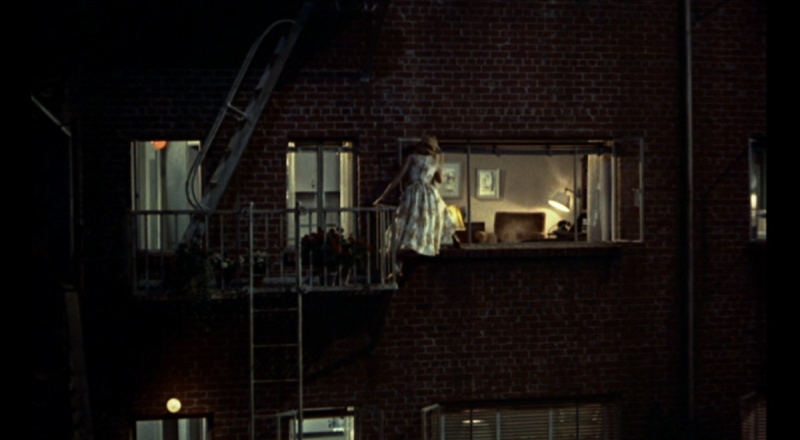 Having created the world of Rear Window in line with real world architecture, for Hitchcock to then invert the rules of how architecture is used in the real world throws the audience. Windows become doorways: traditional means of accessing the outside world, they now become the means of access to the occupants and their secrets, both voyeuristically and physically, with characters climbing in and falling out of them. Private rooms become public spaces, with their inhabitants chained to their separate miseries: Miss Lonelyhearts trapped in her empty apartment, the nameless songwriter trapped in his bustling one – both looking for the same thing. From observing and preserving the laws of architecture through only showing these snippets of others lives from the confines of Jeff’s own apartment, Hitchcock builds palpable claustrophobia. A feeling intensified by the purposely restrictive courtyard acting as a heat trap for the negative emotions gestated by the film.

Pevsner was right about the inescapability of buildings. But when captured and created for cinema, architecture can transcend physical space to become indicative of a film’s intentions, central to its psychological and philosophical motifs, becoming doorways beyond the literal.