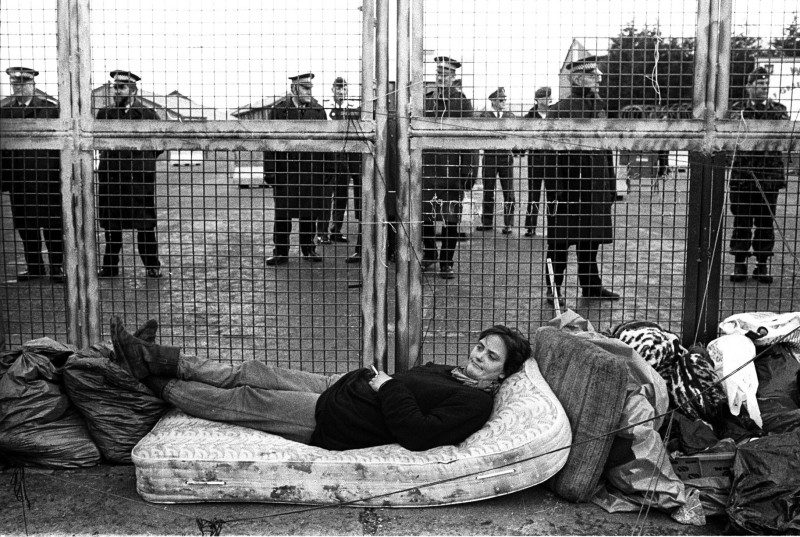 The anti-nuclear Greenham Common Women’s Peace Camp. The women only camp surrounded the RAF base in Berkshire (UK) where American cruise missiles were being stored. 1983

Back in September Miniclick looked at the themes of resistance, protest and strikes with two socially minded photographers, Janine Wiedel and Homer Sykes. In an interview with Janine Wiedel talks to us about her work and the relationships with the people she photographs.

Many of your photographs show people on the outskirts of mainstream society. Is dealing with people, who may be initially resistant to your projects, get better with practice, or is it something that is different each time?

Yes, every situation is different. The initial introduction/approach is always difficult and it does take courage to walk into different & unfamiliar situations. The more you do it, the more you will realise that most people are really pleased if you genuinely are interested in their lives.

The most important thing is to take the time to listen to people and let them know what you are doing and why you are interested. You have to gain trust and then you have to stick to your side of the bargain by taking photographs that represent/reflect what you have learned.

When you worked photographing protest groups, did you feel an affiliation with them and like you were part of the cause, or does having a camera with you create a separate identity from those along side you?

An interesting point. I do often feel very strongly about the causes or (in the case of photographing the EDL and other far right groups) against the causes that I photograph. However, even when I believe in the cause or protest, I do not feel totally part of the group. As an observer my job is to move among people getting an overall feel and finding images that will portray both the strength of emotion/commitment of the protesters as well as something of the causes they are fighting for. In many ways I feel invisible.

Do you find that there is a difference being female, in the way you are treated as a photographer in these socially fragile situations? And if so has this changed over the years or does it remain the same?

Yes, I think perhaps as a woman I initially have an advantage as I am taken to be less of a threat. On the other hand, women are often also taken less seriously (which can also be an advantage). In the end I think male or female it depends on how you approach people and how much time you give them.

The thing that has changed over the years is the prevalence of cameras. Everyone can take their own photographs so the notion of a photographer/person coming up and asking to take their photo it is not the same as it used to be. The internet has also created both a fear of having our image misused and at the same time an overblown sense of importance of our image.