Back in September Miniclick looked at the themes of resistance, protest and strikes with two socially minded photographers, Janine Wiedel and Homer Sykes. In an interview with Homer Sykes, he elaborates on his practice past and present. 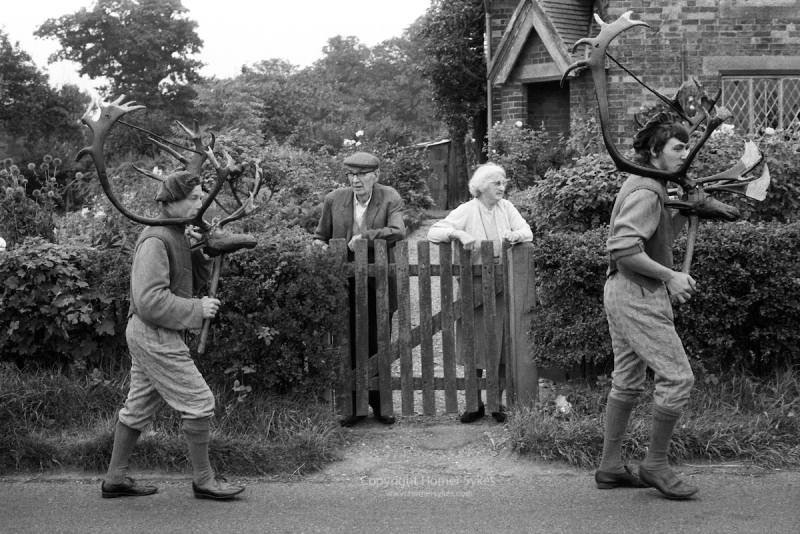 Some of your images from the 70’s highlight the fragility and division of the class system in Britain. Do you think this depiction is harder to recognise when taking photographs today?

Yes it probably is. During the 1970s there was a very distinct cloth cap top hat mentality. In every day life people dressed differently depending on their class. If you looked and were interested it was quite obvious. Undoubtedly Britain today is much more homogeneous, and at the same time much more racially diverse. But it is still easy to spot class differences amongst Caucasian Brits. It translates into body posture and the styles of clothes. I have two pictures for example, both of young men and their girls friends, both group are in business pin stripe suits and wearing bowler hats. One group are hunt servants and they look it and the other group are cavalry officers and they look it too. Just body posture and a confident air, the slope of the shoulders, the rigidity of the back. Walk down any suburban London high street and people dress in a completely way than they do in the central parts of London for example.

You documented protest and social changes due to your line of work in the 60’s, 70’s and 80’s. Do you have any desire now, to take photographs of similar issues happening in today’s society?

Not really, I am a senior citizen! I still have plenty of energy and I wish often I was younger and … But you know, when I was making photographs in the 60s, 70s and 1980s I could often be one of just a few photographers covering a demonstration, an event or a social issue. I have no desire any more to compete with so many other photographers.

Can you tell us a little bit about any projects you are currently working on?

In the 1970s I published a book called ‘Once a Year Some Traditional British Customs’, only a few hundred copies were bound and sold. However, the work became well known over the years and the book  much sought after. Dewi Lewis Publishing, reprinted this volume in 2016, with 50 ‘new’ pictures from the 1970’s body of work. Including many customs that have since completely died out. It has been a great success, and I am delighted with the way it is selling. https://www.dewilewis.com/products/once-a-year

The work is in the V&A, exhibited in Tate Britain and is in many national and private collections. Today I am working on a series of photographs of similar events that I did not document in the 1970’s. Besides these local annual events I have about 18,000 tightly edited, key-worded and captioned images on line. Perhaps 10, 000 are from the start of my career in 1968 through to the mid 1990’s. So most of my time, these days is spent managing My British Archive http://homersykes.photoshelter.com/ and promoting bodies of work from the 70’s and 80s, that have been forgotten about, or indeed never published at the time. Craig Atkinson at Cafe Royal Books https://www.caferoyalbooks.com/ has been a wonderful help in this endeavour. Why was the work never published… one might ask? Well, the odd image may have been, but during that period I was just too busy working, as we say today, creating content.