After being introduced to us by Joy Stacey, Pablo Pérez Castelló has reviewed the latest immersive artwork from Izdihar Afyouni, Thicker Than Blood…

“As an audience member and inexplicable participant at Izdihar Afyouni’s immersive art exhibition Thicker Than Blood, and having been subjected to The Interrogation, this review focuses my an account of the influence that this kind of event has on a person – namely, to be exposed to the underlying oppressive practices in modern societies due to arbitrary factors that lead to power relation imbalances which can be used to marginalise (and ultimately punish) the least powerful. This review contains an autobiographical weight, since I was subjected to a mock interrogation procedure by the artist and her colleague, and so the narrative I will put forward here might be of value to understand Thicker Than Blood’s importance as a work that sought to denaturalise what is natural, and problematise what might, at first, seem unproblematic.”

As a PhD student in Philosophy, I attended Thicker Than Blood with the intention of experiencing phenomena that is not a part of my regular life. The event took place in a multi-room event space and dungeon. Upon entering the space attendees were greeted upstairs and given a consent form that read as follows:

In order to participate within this artwork, and thus gain access to the various rooms and performances of the event, participants must consent to the sampling of their blood on site.

All data, and all materials used to collect data, will be destroyed upon the completion of the event. The machine used to test guest’s blood does not have the capacity to store any information.

The sampling of blood will be carried out by professionally trained medical nurses in sterile conditions. The nurses have been trained to use the necessary on-site equipment in  a safe and conscious manner by the organizer of the event, who was herself thoroughly trained and tested by the manufacturer  of the machine used.

You may leave this event at any time.

By reading and signing this document, I consent to my participation within the live artwork Thicker than Blood, and to the immediate on-site sampling of my blood.

After agreeing to the procedure and signing the form, I waited in line for the sterile medical room downstairs, where a capillary sample of my blood was taken and tested by the nurse in some small machine, after which I was marked with an X. Visible from the door of this room was one of the larger exhibition spaces, where a sculpture of a St. Andrew’s cross was on display. This made me feel uneasy, I was marked by an X on my hand, and there was a red X in the room. My own blood, or rather, an arbitrary factor in my blood (the white blood cell count) was the cause of my person being marked. Soon it became clearer that the X would mark me out from the rest of the audience, for I started to be treated by the event organisers in an unusual and hostile manner; I was spoken to as if I had committed some crime. At some point one of the organisers led me into the interrogation room, for I was marked. Slightly nervous, I entered – after all, I was there to experience something different. 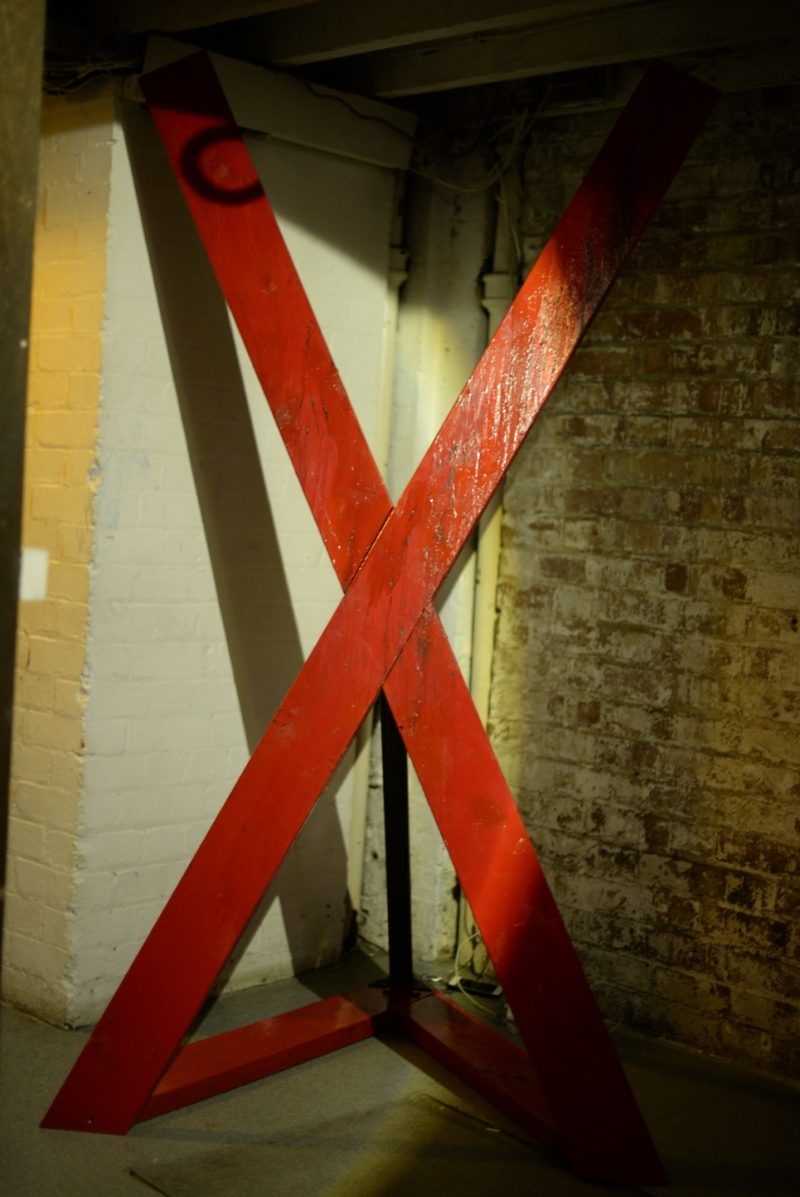 In a small room adjacent to the exhibition space, dark and solitary, I was left to stew. In those few minutes before anyone arrived, I felt slightly frustrated for they announced that people with a different mark (referred to as the Kindred) were called in to a separate room to enjoy a performance by one of the artists on the bill. Afterwards, the first interrogator arrived – serious and cold. From the very first question, I had that same feeling of being dismissed, looked at as a suspicious person of less value. After some introductory informal questions, Izdehar Afyouni entered into scene, to act as interrogator. Izdehar Afyouni’s arrived with a cameraman that recorded most of the interrogation. I can recall both interrogators inquiring about personal details of mine and investigating on my Facebook page, being able to find out my girlfriend’s name very quickly, and inquiring about her – this created an atmosphere of surveillance, and of being inspected that resembled Foucault’s ‘panopticon denunciation’ in Discipline and Punish. Retrospectively it seemed to me of great interest how a social network such as Facebook could become under these circumstances a surveillance tool, and how oblivious this fact was in my daily life: denaturalising normality.

Once these quick initial questions were asked the interrogators positioned themselves as superior to myself: I was the marked interrogated, and they were the interrogators that had the power to find out what they wished. Not just to find out what they wished, but they were the ones that had the authority and legitimacy to interpret as they thought best my answers. When asked about my work, I answered that I taught home-schooled children through the company atutorworks, the next question was oriented towards finding out if I was a paedophile or not. Every answer that I would give, no matter the evidence, would be used against me or ignored, constructing a narrative that could not be counter argued, for the evidence I would provide was ignored – again, so much of Foucault’s work seemed to be coming to the fore, in this case with his Madness and Civilisation – I was the mad one that was silenced by those with knowledge, the interrogators. At this point my frustration became apparent for I was being silenced, unable to attend the rest of the event and my moral integrity was, at the least, put in doubt via an unimaginable manipulation. The interrogation continued in a similar tone for a while, and afterwards I was left alone until most of the event was completed. I do not know for how long I was left alone, but this period was of significant importance from an analytical point of view, since I had the chance to reflect about what had happened so far.

In that space, it occurred to me that what I was experiencing in a constructed manner had parallels with many people’s lives. Lives that are interrupted, by way of surveillance or poverty or imprisonment, due to arbitrary factors beyond their control such as being born in this or that neighbourhood, this or that country, this or that family, this or that race, or this or that gender. In my case, it had been the number of white blood cells in my blood on that particular day.  In those instances I recalled the film Freedom Writers, a film in which, as in Thicker Than Blood, what might seem at first normal (and perhaps deserved) is not. I was recalling in particular, a discussion that occurred about the film while studying at UCL in a module called Representations of Education in Film and Literature. The following case was put forward: ‘is it fair to put in prison a boy that goes into a shop, bumps into someone from a different gang accidentally, gets into a fight, and then kills the member of the other gang?’. It would seem natural that a boy that shoots another boy should go to prison, he should be punished. And yet, that person did not decide to be born in a context in which the norm is to use force as a means to resolve conflicts – that fact, to be born in such an environment is arbitrary. As it was arbitrary that I found myself in a small dark room, without the possibility of experiencing the whole event. And, why? Because of the number of white cells in my body. What if they had decided to consider red blood cells? I was excluded, unable to be part of the Thicker Than Blood audience, due to an arbitrary factor, like so many other people are excluded in so many different contexts due to arbitrary factors.

In short, this event attempted to go someway to allow me to experience (with all the necessary quotation marks),a similar situation to that of many marginalised groups due to arbitrary factors from a moral point of view. Izdehar Afyouni’s work should be encouraged in any democratic society, for it denounces oppressive practices, and the use and consequences of different power relations to marginalise. Her work values difference, singularity, and heterogeneities – necessary values in any democracy.