This year, in the true spirit of Christmas, we’re doing the Miniclick Photobook Advent Calendar where we’ll look at a different photobook, newspaper, magazine or ‘zine we like by someone we’ve worked with in the last 12 months, right up until Christmas Day.

We did a Brighton launch for Stuart Griffith’s “Pigs Disco” earlier in 2013 and it was ace. Stuart was in discussion with Ewen Spencer, who he goes way back with, back to their time together at Brighton Uni. It was in turns a fascinating, hilarious and insightful look into the period of Stuart’s life that lead to this book. 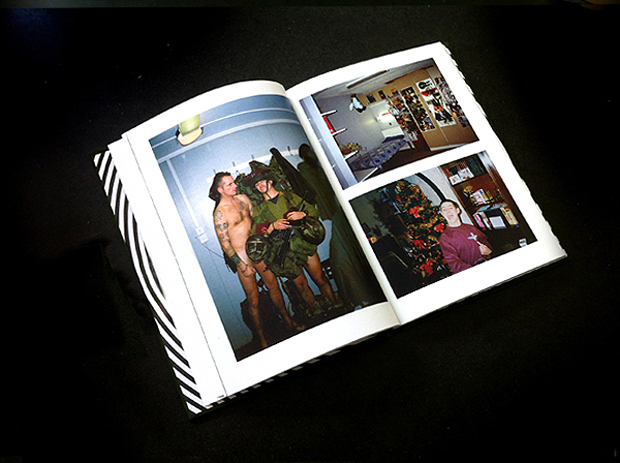 “Photographer Stuart Griffiths is best known for his work documenting the lives of British troops and as a former Paratrooper himself, it’s no surprise that he has such a nuanced understanding of the men and women who serve in the British Armed Forces. His newest book Pigs’ Disco brilliantly juxtaposes the grim and gritty reality of life as a British soldier stationed in Northern Ireland during the Troubles with images of the nascent rave scene and drug use in the British Army. What Stuart does so skilfully is reflect the strange dichotomy, which sees these soldiers as an impersonal collective unit on the one hand, and young, sometimes very fragile individuals on the other.”

The book documents Stuart’s time in the Paratroopers during the Troubles in Northern Ireland, the drugs use that was occurring in the forces, and the rave scene that was emerging at the time as well. It combines Stuarts photographs of that time and his writing and illustrations. His photographs and writing of the time in the army brilliantly convey the ‘hurry up and wait’ nature of it all – what appear to be long periods of boredom (and the things young men do to break the boredom) interspersed with intense and frequently violent action. It’s an insight into a life most of us won’t know – the writing in particular is superb (not to say the photos aren’t as well, of course).

The combination of writing, photos and illustrations work perfectly – Ditto Press (publishers) always seem open to trying out something a bit different and they’ve nailed it here, right down to the psychedelic inner cover linings.

Pigs Disco is published by Ditto and costs £19.99 from here.